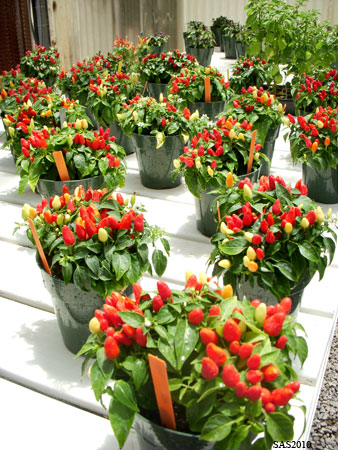 Chile Plants in the Greenhouse

New Mexico's chile pepper production can be separated into five major commodities: green chile, red chile, paprika, cayenne, and jalapeno. Traditionally, the New Mexican pod type had been grown as a dual purpose crop. First, a crop of green pods were picked, then a second harvest for red fruits. However, increased demand by processors and consumers for improved horticultural traits for each of the green and red chile pepper has led it to be viewed as two separate crops. In New Mexico, processing and marketing of chile pepper has made it the number one cash food crop. In 2007, the total economic value of the New Mexico chile pepper production and processing industry in New Mexico was estimated to be in excess of $350 million. Chile pepper plays an important role as a cash crop for many small acreage growers in the predominate Native American and Hispanic population areas in the state. New cultivars for these growers for sale in the fresh market will increase their economic situation. With more national food processors locating to New Mexico and with an oleoresin extraction facility already in operation, a further increase in the demand for chile pepper products is certain.

The development of adapted disease and pest resistant chile peppers provides in an environmentally safe and economically beneficial way to increase New Mexico's production. The most pressing disease problem facing New Mexico's chile pepper growers is chile pepper wilt caused by the fungus-like water mold that is related to brown algae, Phytophthora capsici. Since its initial discovery in New Mexico, this disease has become progressively more devastating as increases in chile pepper acreage and a trend toward chile pepper monoculture have occurred. We are focusing on solving this problem through genetically resistant cultivars.

Early evaluation of breeding and genetic studies use the facilities at the Leyendecker Plant Science Research Center and the Fabian Garcia Research Center. The Centers' personnel and equipment help in planting and maintaining the program's research plots. In addition, advanced varietal trials are conducted to evaluate the chile pepper cultivars that are being used, or may have use in New Mexico. The information provided by advanced varietal trials enables New Mexico growers and processors to make sound judgment of new varieties. The evaluation of chile pepper varieties with different characteristics, as well as new types of chile peppers, provides an opportunity to open new markets and possibly expand chile pepper acreage in New Mexico."